The French Laundry may be a celebrated Napa Valley restaurant, but its origin story began over 60 miles away in co-founder Sally Schmitt’s childhood home in Citrus Heights. In a new culinary memoir, the pioneering chef honors her Sacramento roots.

Editors’ note: This story appears in the March/April 2022 issue. Sally Schmitt passed away on March 5 at the age of 90, shortly after the publication of the article.

As Sally Schmitt tells it, The French Laundry—the highly acclaimed Yountville restaurant that she and her late husband Don founded in 1978 in a run-down river-rock-and-timber building that had once been, yes, a French steam laundry, but also a saloon and a brothel—has its genesis in Citrus Heights, where she was raised on her family’s farm.

“I grew up having tasted real fruit and vegetables,” says Schmitt, a newly minted nonagenarian and an early believer of what would become the farm-to-fork gospel. “Having a garden taught me to let fruit and vegetables come to their best before you pick them.” She now does that at her Mendocino County homestead, which includes an apple farm and the seventh significant kitchen that the housewife-turned-restaurateur has ever cooked in, meaning that it was just edged out of her new memoir, Six California Kitchens, set to be released on April 5. 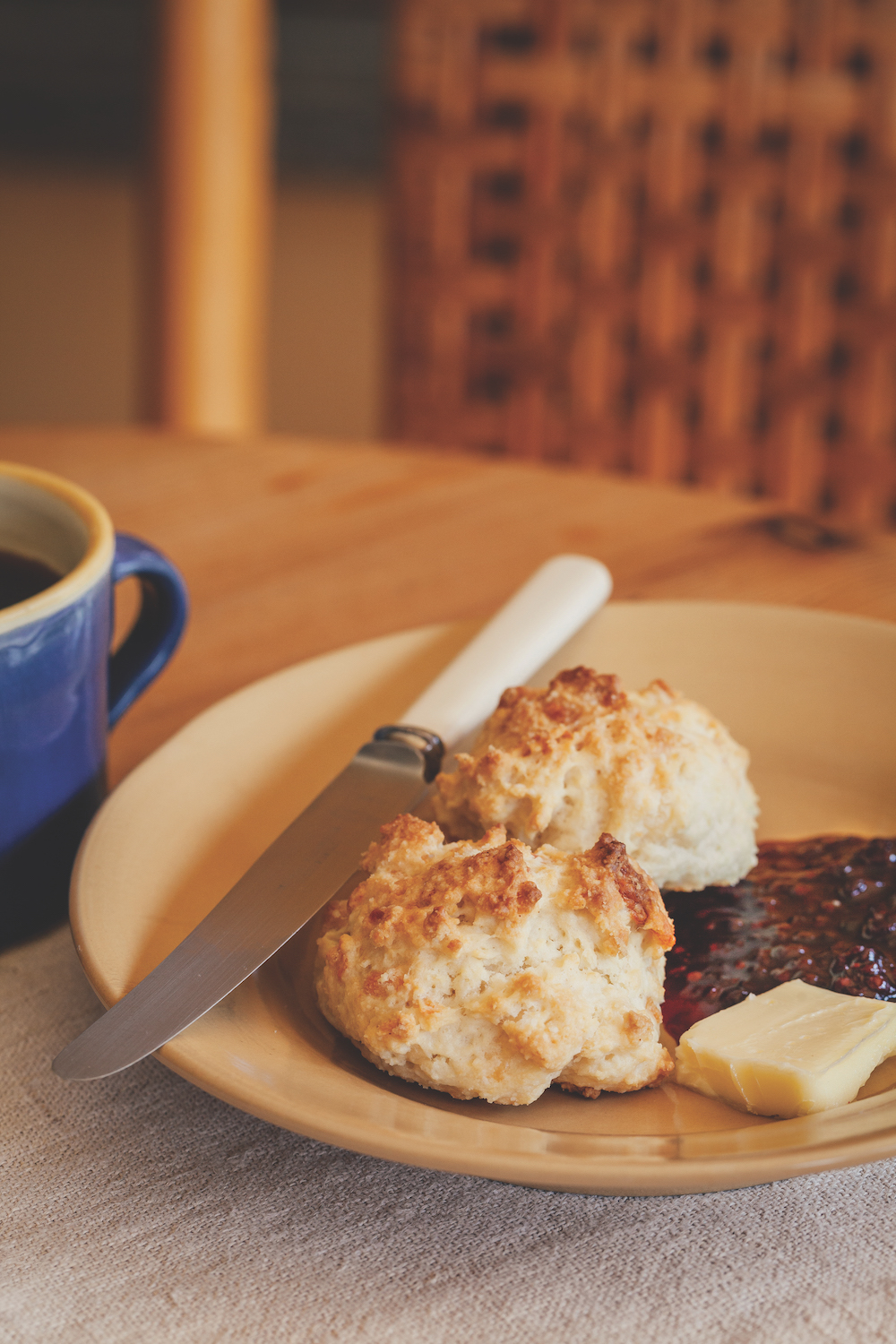 The family recipe for cheese drop biscuits, which came from Schmitt’s grandmother, is featured in the hometown section of Six California Kitchens. (Photo by Troyce Hoffman)

A second-generation Californian, Schmitt slow simmers a rich history for the reader through wholesome yarns and heartfelt family recipes that have made appearances, in one form or another, through the book’s titular kitchens, including three Wine Country restaurants. The French Laundry holds the fourth spot in Schmitt’s chronology. “It was a very, very happy time,” she writes of the restaurant’s humble beginnings.

But leading the 352-page culinary journal is her family’s beloved Citrus Heights kitchen, where her mom cooked mostly from memory and only used notes and recipes cut from newspapers and magazines for baking and making desserts. “I don’t remember her cooking from cookbooks,” Schmitt notes.

The Sacramento Valley tales and recipes—from bumper-crop green beans traded for credit at the local grocery store, to apricot jam made with golden-ripe and just-green fruit from the family farm’s two Royal Blenheim trees, to Cheese Biscuit Dough Gods, oddly monikered after her grandfather’s countryside slang for mule droppings (the pastry’s shape was reminiscent of such)—lay the foundation for her pioneering cooking career. Schmitt credits her home economics studies at UC Davis with giving her the confidence to experiment with new recipes. “My laboratory courses at Davis came in handy,” she writes.

In his foreword for Six California Kitchens, venerated chef Thomas Keller, who purchased The French Laundry from the Schmitts in 1994, observes, “There was nothing grandstanding about Sally’s food. Her repertoire employed Gallic touches but also drew on cherished elements of Americana: tomato soup, braised oxtails and cranberry-and-apple kuchen.” Once a year, his three-Michelin-starred restaurant offers a prix fixe meal to Yountville neighbors featuring dishes from Sally’s original menus.

Though Schmitt may be considered an unsung heroine of California cuisine, her farm-bred modesty gives her life’s story the sort of salt-of-the-earth authenticity and charm that our modern society seems to crave. As Keller writes, “We can all learn from Sally and her approach to food, to say nothing of her approach to life.”

This article appears in the March-April 2022 issue of Sactown Magazine.