Look down when you walk around town and you might spot some beautiful relics beneath your feet. Behold the magic of “vault lights” and how some cities are bringing them back to life.

From the mid-1800s to the early 1900s, many cities around the world, including Sacramento, were built with subterranean rooms beneath the sidewalks that served as storage areas for streetfront merchants. And in the days before electricity was abundant, the most common way to brighten up these dark basement spaces was with “vault lights” (also known as sidewalk prisms or pavement lights)—glass blocks or tiles inserted into the sidewalk to allow sunlight to flood the room below.

The light bulb eventually ushered these quirky urban curiosities into extinction, but a smattering of them still exist today. And in some cities, clever property owners are breathing new life into them by lighting them from below. In San Francisco, the sidewalk prisms in front of the appropriately named City Lights bookstore glow beneath the feet of window shoppers. In Vancouver, the owners of a downtown hair salon installed lights that change colors under the prisms. A neighborhood bike shop in Victoria, British Columbia, places Christmas lights below theirs each year. Similar efforts have taken place in New York and London.

Here in Sacramento, there aren’t many vault lights left, but a few grids can be found near the corner of 8th and J streets downtown, as well as on 9th between K and L. There are also pavement lights outside the Grocery Outlet store on 17th near Capitol Avenue.

And the result of illuminating these tiles from below is, in a word, magical. One Instagrammer in Vancouver recently called them “unexpected moments of beauty.” And what city couldn’t use a few more magical, Instagrammable moments of beauty? 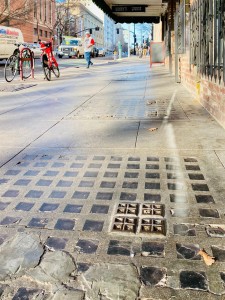 The vault lights on the 9th street sidewalk are in front of the Capitol Park Hotel, built in 1912, which is now owned by Mercy Housing and is currently being operated by the Sacramento Housing and Redevelopment Agency as a homeless shelter. It would be a tiny investment for the SHRA to place some colorful lights underneath the prisms to improve the streetscape for both its residents and passersby. Later this year, the property will be gutted to convert it into permanent supportive housing. The city should make sure that Mercy Housing keeps the historic vault lights as part of the renovation.

Perhaps Preservation Sacramento could get behind an effort to safeguard the city’s few remaining vault lights.

One of our city’s biggest selling points is our history. We’ve managed to protect our Gold Rush-era district in Old Sacramento, and plans are afoot to restore the 19th-century factory buildings in our railyards. Here’s a chance to not only preserve a small piece of our past, but to shine a spotlight on our new urban renaissance. These are sidewalk stories worth retelling.

Vault Lights from Around the World