The Wonders Down Under

Sacramento’s annual Wide Open Walls mural festival is upon us. But in many cities around the country, people are looking down on public art—about 5 to 6 feet down. It’s time to wash that gray right out of our streets.

In 2014, on this page, we floated the idea of dressing up the walls of our city’s buildings with massive murals. David Sobon—longtime nonprofit fundraiser extraordinaire—then took on the Herculean task and has been organizing a yearly mural festival since 2016, transforming the city into a gargantuan gallery for public art.

Over 250 paintings later (the sixth annual Wide Open Walls fest is set to take place from Sept. 9-19), it might be time to expand our artistic horizons to horizontal canvases—the streets, bike lanes and sidewalks beneath our feet—like other places around the country, from Kansas City to Pittsburgh, have in recent years.

One impetus for this national movement has been the Bloomberg Philanthropies’ Asphalt Art Initiative, which launched in 2019 and has already helped fund such murals in dozens of cities, with more on the way. The project has resulted in safer and slower streets, the beautification of blighted areas, and an abundance of community pride.

One example was completed earlier this year in Reno, where a giant swath of downtown concrete was transformed into a stunning display of color and form. Three hundred local volunteers signed up to help bring it to fruition.

We have at least one similar local example—a gorgeous dragon street mural in Davis created by artist Danielle Fodor that winds its way through the 13,000 square feet of streets in a residential neighborhood there. Completed in 2018, it drew 450 volunteers. Scroll to the bottom of the page here to see it.

Other parts of the region should make their marks too. For instance, downtown Sacramento—struggling with office vacancies due to Covid—could certainly use some post-pandemic TLC. How about a massive asphalt mural on K Street, at Downtown Commons, on R Street in the front of the Warehouse Artist Lofts, or even on Capitol Mall?

David Sobon has proven himself to be a leader in the arts, but with public streets in the mix, it will likely also take the support of Sacramento’s Office of Arts & Culture and the folks in all the city halls around our region. But we shouldn’t just adopt a top-down approach. Local artists should take initiative as well, identifying good sites for street murals and pitching concepts to their local representatives.

A new opportunity to join the Asphalt Art Initiative program—which awards grants up to $25,000 (and provides a handy Asphalt Art Guide to help projects get off the ground)—may come next spring, but we don’t need to wait and hope to get a national grant to make these projects, large and small, a reality.

In Davis, Fodor credits the success of her dragon mural in part to the “early and enthusiastic support of the city of Davis, as well as the California Arts Council, and the National Endowment for the Arts,” plus that of more than 100 individual donors, various local businesses, including a Sacramento company called Asphalt Impressions, which actually specializes in coloring asphalt.

There’s never a bad time to beautify a city, but challenging periods like this one seem like a particularly good time. I’d like to believe that the road to civic happiness is paved with art. Now is the moment to breathe some new—and colorful—life into the streets of Sacramento. 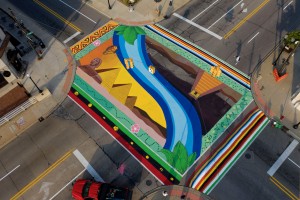 An intersection mural in Saginaw, Michigan. (Photo by Cody Powers) 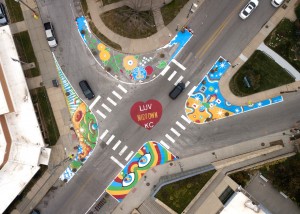 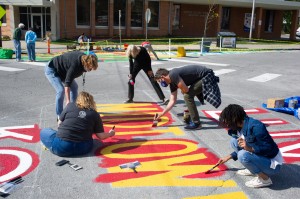