After going dark last year due to the pandemic, Fourth of July celebrations are ramping up around the region. Whether you stack up at a pancake breakfast in Lincoln, catch a Sacramento Philharmonic & Opera concert while sitting on the field at Sutter Health Park, or get all shook up when an Elvis Presley tribute band takes the stage in Auburn, be sure to stay for the fireworks and go out with a bang this Independence Day weekend.

July 2-4 For over half a century, folks have gathered for the Folsom Pro Rodeo to see bucking broncos attempt to dismount their brave jockeys. In addition to the eponymous event, this year the three-day party will also feature performances from locally based motorcycle tricksters The Flying Cowboys and acrobatics on horseback by the Painted Ladies, plus an evening dance party filled with boot-scootin’ boogies. A star-spangled fireworks show caps off each night. $25. 6 p.m.-midnight. Dan Russell Rodeo Arena. 200 Wool St. Folsom. 916-985-2698. folsomprorodeo.com

July 3-4 Get a double dose of holiday celebration at Rancho Cordova’s Hagan Community Park for the city’s two-day Fourth of July extravaganza. A Third of July Parade on Saturday morning will feature eight local marching bands and 20 dancing horses as they saunter 1.5 miles down Coloma Way to stir everyone’s patriotic spirit. All weekend long, meet up at the park just down the street from where the parade ends for hot dogs and other grill fare from Drewski’s Hot Rod Kitchen and a concert by CCsegeR, a Creedence Clearwater Revival/Bob Seger cover band (performing both nights at 8 p.m.). A fireworks display begins at 9:45 p.m. on both Saturday and Sunday. $5 admission (free for ages 5 and under), $10 parking. Sat. 9 a.m.-10 p.m. Sun. 6 am.-10 p.m. Hagan Park. 2197 Chase Dr. Rancho Cordova. 916-273-5701. cordovacouncil.org

July 4 The Salute to the Red, White and Blue will return to Elk Grove Park for its 25th year after a pared-down fireworks broadcast in 2020. Grab picnic fare like sriracha-ranch fried chicken waffle cones from The Original Bubble Cone and pull up a lawn chair on the grass near Pirates Island for a pre-light-show performance by Clean Slate, a Sacramento cover band that plays ’70s-era hits by the likes of Earth Wind & Fire and Aretha Franklin. The fireworks (which will once again air on ABC10 if you can’t attend) are set to give the cosmos a run for its money starting at 9:40 p.m. $10 for parking. 6-10 p.m. Elk Grove Regional Park. 9950 Elk Grove Florin Rd. Elk Grove. 916-691-2489. elkgrovecity.org 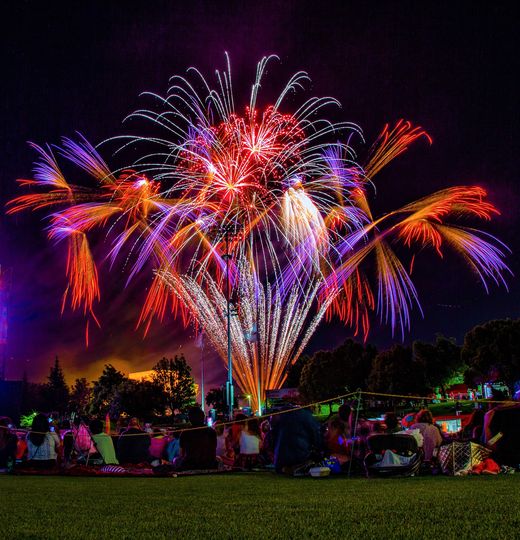 July 4 The annual Fourth on the Field celebration at Sutter Health Park, home turf of the Sacramento River Cats, will be making its highly anticipated comeback this year. Gates open at 7 p.m. for picnicking, so get their early to grab a good spot on the grass or prime seat in the stands before the Sacramento Philharmonic & Opera performs just after 8 p.m. The group will also play patriotic classics to set the tone for sky-sized firecrackers like cherry bombs and bottle rockets that will start blasting off left of center field at 9:30 p.m. $20-$30. 7-10 p.m. Sutter Health Park. 400 Ballpark Dr. West Sacramento. 916-376-4722. sutterhealthpark.com

July 4 The town of Lincoln will resume its all-day Fourth of July fête starting with an early morning pancake breakfast at the Veteran’s Hall before moving on to McBean Memorial Park for the horseshoe tournament or a kids’ fun zone featuring a rock wall and inflatable jump houses. Wind down by cheering on the California Collegiate League’s Lincoln Potters at the customary Independence Day baseball game at McBean Stadium—the first pitch will be thrown at 6:05 p.m. and the fireworks are scheduled to follow after the final out has been called. Free. 7 a.m.-10 p.m. Downtown Lincoln. lincolnca4thofjuly.com

July 4 Be sure to find a shady patch of grass to set up a picnic blanket and propane barbecue (no charcoal or wood allowed) at the El Dorado County Fairgrounds in Placerville for this year’s Fourth of July Family Blast. If you forget to BYOG (bring your own grill), fear not—you can order Filipino street food like lumpia and pancit noodles from Sacramento-based food trailer Phil Me Up. Then get down to live music by classic-rock cover band Dream and the Dreamer or take a spin on the Ferris wheel before the pyrotechnics light up the night sky at 9:45 p.m. $5 (free for ages 6 and under). 4-10 p.m. El Dorado County Fairgrounds. 100 Placerville Dr. Placerville. 530-621-5860. eldoradocountyfair.org

July 4 Festivities begin at 10:30 a.m. with a community parade of dancing horses and pageant queens that starts at the corner of Harrison Avenue and Lincoln Way. The Main Street march will culminate at the Gold Country Fairgrounds in Auburn, where the festivities will continue with a musical performance from Elvis Presley tribute band Billvis and the Hound Dogs, along with axe throwing and gymnastics demos. The fireworks will burst onto the scene at 9:30 p.m. Free. 10:30 a.m.-10:30 p.m. Downtown Auburn. auburnchamber.net

You Might Also Like
Your 2021 Guide to Outdoor Movie Screenings in the Sacramento Region
Craving of the Week: Nash & Proper’s Ice Cream Chicken Sammich
Nut Tree Forever