Your book, Bread Baking Basics, just came out. Can you take us back to a time when you yourself were learning the basics of bread?

I was always a home cook, never really did any baking. But when my son was born—he’ll be 11 in August—I was a stay-at-home graphic designer. I had a lot of time between projects and while he was taking naps. I read about sourdough in a book by [slow food advocate] Michael Pollan called Cooked. In that book, he talks about learning to make sourdough from the Tartine Bread cookbook. So I got Tartine Bread, and that kind of got me going. [Pollan’s] books have been a major influence on my baking and food philosophy. I love his idea, “Eat whatever you want as long as you make it.”

I did. That’s how I got started. I read that entire recipe and stuck with it. And then over time, I changed the parts that didn’t suit me. I simplified and figured out how to do it from there. Mainly I switched it to measuring in cups, not grams, and not having to measure the temperature of the water. The way I do it is quicker. There’s less time in between steps. It’s still a three-day process, but the hands-on [part] is only about 20 minutes. Every recipe for sourdough starts with the same ingredients—flour, sourdough starter and a little bit of salt and water. 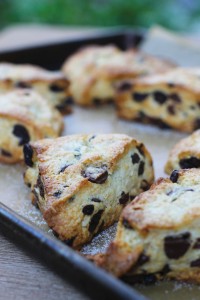 Food television has brainwashed us into thinking that baking is an exact science. But it sounds like you’re debunking that myth in Bread Baking Basics.

My goal is to debunk. I’ve always been a home cook, so what I bring to the table is figuring out for everyone else the easiest way to make a recipe. If you’re going to have a bakery, if you’re going to do this professionally, you’re going to use a digital scale to make sure your flour is measured out to the exact gram and you’re going to use a thermometer to test the temperature of the water and the bread. But the recipes [in my book] just use sticks of butter and cups of flour and water, and it all works great.

How long did it take you to get comfortable with baking bread?

With sourdough it didn’t take very long. The very first loaf I did worked. Now looking back, when I see a picture of that loaf on my phone, it doesn’t look anything like the loaves do now. Along the way, there are ups and downs where you think you’ve nailed it and then suddenly, for whatever reason, you start making pancakes instead of loaves. Sticking with it, you kind of figure out, “Oh, maybe I was doing this part too long” or “It was too hot.” While working on this book, did you learn something new about bread? I learned that while bread spans all different cultures, all the different breads essentially start with the same ingredients—flour, water, salt and yeast. It’s the shaping and the preparation and how long you bake it and maybe something else you add to it that makes them different, but you know, we’re all still baking bread. There are a couple of Japanese milk bread recipes [in the book] that make a super soft, super fluffy bread. And there is also a recipe for conchas from Mexico.

For the ultimate novice, which recipe in the book would be a good place to start?

There are two recipes that I recommend to everybody. The first is called “The Easiest Burger Bun”—it was also in my first book [Buns & Burgers]. It uses yeast and you have to let the bread rise, but it’s super easy to make. There’s another recipe in the book for a flatbread that you just cook in a pan and it uses baking powder as the leavening agent. So you could really make that flatbread from start to finish in about 30 minutes.

Where can we see or taste your bread if we don’t happen to live with you?

Before the pandemic, I was going out with [the team behind catering company] American River Provisions and we were making pizzas together, doing a lot of pizza pop-ups. Those will hopefully be coming back. The last time we went out before the pandemic, we made charcoal sourdough pizza crust. Then we’d cook them in their wood-fired pizza oven. You make the pizza, throw it in the oven and five minutes later people are eating it—seeing their reaction, you get that instant satisfaction that you did it correctly. I’ve won at the State Fair a few times. They didn’t do [the fair] last year, but in the previous five years, I won blue ribbons for my Pullman loaf, charcoal hamburger buns and my sourdough. Once I was disqualified for my sourdough loaf with walnuts, coconut and cherries. You have to disclose what ingredients are in the bread and I forgot to write down the nuts.

Speaking of the pandemic, did baking help you get through this past year?

I started writing the book during the pandemic. When the other work I was doing was sparse, it gave me something to do with my time. During the pandemic, I was also doing Instagram Lives and teaching people how to make sourdough starter because that was the main question that was coming to me. And then like four days later I would get messages from people showing the breads that they made. Sharing how to [make bread] definitely felt like a return to something we had forgotten how to do.

I was dropping off sourdough starters on doorsteps. I had always protected my starter like it was a baby, something that was mine alone. I wondered if I’d someday want to open a bakery and use my unique starter. But so much changed during the pandemic, and I just wanted to do something good, useful and helpful for folks, so I started giving away little jars to anyone who asked. I also had tons of regular yeast because I buy it in bulk, so I was a good source for that too. I used to call it “bread bombing” when I dropped off a loaf to unsuspecting friends, so this became “yeast bombing.”

Do you get more satisfaction from making bread or sharing it?

I think I get more satisfaction from giving it away—I love making it and giving it away. The sourdough recipe in the book makes two loaves, so I always keep one and then the other one goes to a neighbor or a friend.

But I do love the process of [making bread]. It teaches me to slow down. It forces you to pay attention to what you’re doing, instead of always being so scattered, running errands and checking your phone and all that kind of stuff. When you’re making bread, your hands are covered in dough, so you can’t pick up your phone. Then after you put in the time and the effort, you get bread! And when your house smells like bread, you can’t be in a bad mood.

Bread Baking Basics was released on June 15 and is available at retailers like Whole Foods, Sam’s Club and downtown’s Capital Books. For more info, visit thefreshbreaddaily.com

This article appears in the July-August 2021 issue of Sactown Magazine.