Hillary Louise Johnson,
The Davis-based New York Times  best-selling author is celebrated for epic sci-fi novels, including his classic Mars trilogy about terraforming the Red Planet and The Ministry for the Future about solving the climate crisis, which former President Barack Obama named as one of his favorite books of 2020. But in his new memoir The High Sierra: A Love Story, which comes out on May 10, Kim Stanley Robinson takes a turn for the terrestrial, covering a half-century of writing, thinking and adventuring across our altitudinous backyard, tracing the origins of both backpacking and environmentalism. He talks to us about entering the God zone while hiking, being a “utopian science fiction writer,” and why despite a certain tech billionaire’s predictions, we won’t be living on Mars anytime soon.

I hear birds singing in the background. Where are you right now?

I’m outside. My office is my front courtyard on the north side of the house. I’ve got a tarp slung up so that I can be in the shade all the time and see my laptop screen. I also work outside in the rain. I’ve got a waterproof power cord and it powers the laptop and sometimes a little heating pad like you use for your lower back that I throw over my feet. I work all the days of the year out here. In the cold, I wear my winter backpacking gear, including a down hood and [fingerless] wool gloves. I feel like I’m on a little backpacking trip.

My work life has turned into an outdoor adventure. I did this about 15-20 years ago, and it was a great move. I thought I was burning out on writing, but what I was really burning out on was staying indoors all day. When I moved out to this courtyard, the first day that it rained and I slung a tarp up, that was it for me. I have never written a single word of my novels indoors since. I’m looking at white-crowned sparrows now. That’s probably what you’re hearing. And the scrub jays, these are my office mates. I’ve got a couple bird feeders around in this courtyard, and because I’m just sitting here for hours every day, I’m just part of the landscape as far as they’re concerned. I’ve had a scrub jay land on my boot at the end of my footstool and just stare at me like, “Are you alive or dead?”

You live in Village Homes Davis. [Completed in 1983, it was one of the first sustainable, solar-powered housing developments in the country.] How else do you incorporate nature into your day-to-day lifestyle?

I have a vegetable garden down at the end of the lane. Village Homes has common areas where you can garden. I finish breakfast, go outdoors and don’t come back in ’til dinnertime. And this is including my work, my recreation, my gardening. [Hiking] the Sierras is kind of like the punctuation. 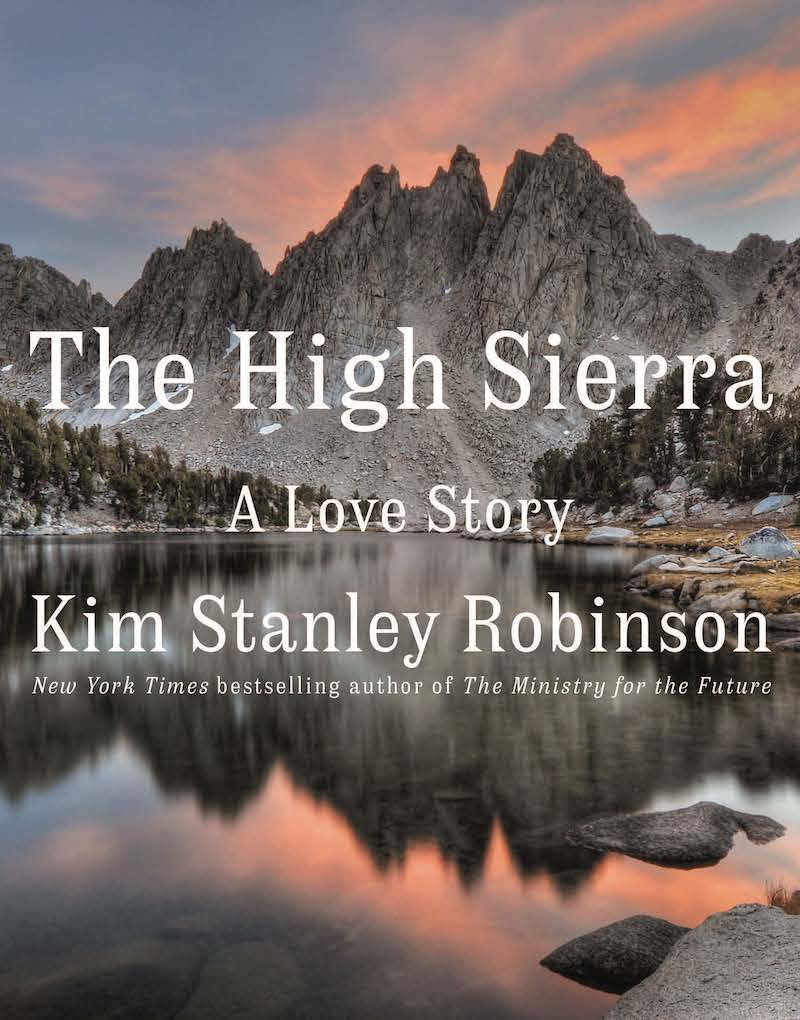 Speaking of which, in your new book, during one of your side forays into history, you describe an 1864 expedition that may well be the first-ever backpacking trip in the Sierra. Why do you think backpacking emerged there?

[Historically] people didn’t wander in mountain ranges in order to sleep outside and then circle a mountain or do something pointless and then come back out. Just fooling around up in the mountains—backpacking—is a Sierra thing. It works best there. Not every mountain range is configured like the Sierra for recreational hanging out and exploring: the hot summers, the fact that it isn’t outrageously steep and has all those high ponds.

You identify the backpacker’s high with the concept of “that sense of elevation, of being raised up”—something you and your friends who started backpacking there in the ’70s called being in the God zone. What is the God zone?

Once you got up there above the treeline in the Sierra, you were in a different space that was cognitive and emotional and spiritual as much as it was physical. And I think that has to do with the whole sense that humans are only visitors there, nobody lives there year-round. There’s something different about it. It really did take the whole book to try to capture what we were talking about with this single phrase, you know, “up into the God zone.” What the heck did that mean? We were young hippies, all very Buddhist, so it was simplistic hippie stuff, almost a joke, but a joke about a real feeling.

You write that the Sierra inspired your depiction of a terraformed Mars in your landmark trilogy Red Mars, Blue Mars and Green Mars.

Well, my interest in Mars in the first place came from photographs [captured by] NASA’s Viking orbiters, where it was obvious that the landscape was a gigantic wilderness, so to speak, with mountains and canyons. When I needed to write up an outdoor scene on Mars, when [the characters] started the terraforming, I could always think about what things look like above the treeline in the Sierra. Red Mars was mostly written in Washington, D.C. [where Robinson lived briefly], but Green Mars, and Blue Mars were written here. I was living here in Davis and going up to the Sierras a lot. This would have been 1994-95. I began to take a little lab notebook with me on my backpacking trips, and sit down by a pond thinking specifically, “Write what you see and that will be what [the characters see].” So I specifically wrote Sierra paragraphs right into Blue Mars.

We’ve made quite a hash of this planet. Bottom line, can humans really terraform Mars? Is it feasible? Is space going to be the next frontier for human life?

I will say this: I would claim my Mars trilogy is a good novel—it really is just a three-volume novel; I don’t like “series” as a word— but not a good plan. There is no Planet B. And we learned things about Mars since I finished my Mars trilogy [Blue Mars, the last installment, came out in 1996] that actually make terraforming it much more difficult. The surface is poisonous with perchlorates [a toxic chemical]—that’s a new finding. And more and more we’re worried about what cosmic radiation does to the brain. Mars’ lack of a magnetic field means that it’s not going to be safe for humans until you are really well terraformed, and that now looks to be thousands of years away. Then there’s nowhere near as much nitrogen as there ought to be in an ordinary planet— no one knows why—and you need nitrogen for a biosphere.

Also, terraforming Mars might take 10,000 years, and we’ve got a 100-year emergency right here. So the timescales are ridiculously off. I have to explain this every time people bring up Mars, because the Mars trilogy is still my most famous work by a longshot. But The Ministry for the Future is changing that real fast.

That’s your most recent novel, set in the near future. It’s been widely cited as a blueprint for how to address climate change. Can you explain the premise?

In Ministry, there’s a U.N. agency based in Zurich tasked as part of the Paris Agreement to defend the interests of future human generations and also all wild creatures that can’t speak for themselves. It’s the story of the next 30 years of humanity making a successful adjustment to climate change and biodiversity loss. Ministry is not a perfect future—it’s filled with turmoil and messiness and lots of local defeats. But it’s a best-case scenario of what we could do if we did everything right. There has been the most amazing response to that book, far outstripping the response even to the Mars trilogy. People wanted this story.

How would you localize the events of Ministry? What would a chapter of the novel look like set in Davis or Sacramento? What does our corner of the apocalypse look like?

California is really ahead of a lot of the world, and that’s in Ministry, because I wanted to tout the things that California has done right. Right now there’s the 30×30 program—the state push to conserve 30 percent of California’s land by 2030. At this point, we’re at something like 24 percent. So it’s an achievable goal within a realistic timeframe. In Davis, Village Homes is 40 percent open land and edible landscaping. But ordinary suburban neighborhoods could begin to think about less grass, less water, more native species and more wildlife corridors. There are things you can do as local landowners and as local citizens that begin to add up pretty quickly to a larger vision of the landscape.

What about the current drought? Our region just had the driest January and February on record.

If we are in the start of a historical megadrought that could last decades or even a century, then what happens to California’s 35 million people? Well, here is a science fictional thought: The Columbia River runs about 100 times as much water as the Colorado River, and it’s all pouring out into the Pacific [Ocean]. A lot of it is needed for salmon, but a lot of it is freshwater pouring out into the ocean in such quantities that you could put an intake pump there, west of Portland, past most civilization, and not take anything but say, 5 percent of the flow, putting it in a water pipeline right next to I-5, maybe between the east and the west lanes, running down and dropping in Lake Shasta. Lake Shasta is huge, and plumbs everything right down to Los Angeles. California is already plumbed. Given the vastness of the Columbia River, I am surprised this isn’t already a topic for negotiation. This is where you get into terraforming the Earth.

You’ve been called a cli-fi author, as in climate fiction as opposed to science fiction. How do you feel about that label?

Cli-fi is a terrible idea as far as names go. I immediately think it’s like castor oil or eat your vegetables: it’s good for you. I don’t think it’s a selling point. But fiction that shows the effect of climate on humans is what science fiction has to do these days. It’s not as if you get to choose. If you’re going to write about the near future, you’re going to end up writing about climate by necessity. I think of myself as a utopian science fiction writer. I’m much more comfortable with that than climate fiction. But I’ve decided not to be an old guy and complain about the names.

Does that mean you’re an optimist when it comes to the future of humanity?

Well, we are in fact about to start a mass extinction event that will wreck civilization. We are also more powerful than we ever have been before and have better senses of justice, more science and more knowledge. So it’s like a race, if you want a simple analogy, like we’re trying to create a permaculture—regenerative agriculture where you grow your food in a way that is sustainable and organic—before everything falls apart. You stave off disaster by making a pretty great system.

One of the joys of [writing] the Sierra book is that I could get away from these big issues for a while. I was able to say that sometimes, you can just take a walk outdoors and realize you’re on a great planet.

This interview has been edited for length and clarity.

Don’t Miss Our Other Recent Q&As

From the (Decidedly Uncluttered) Desk of Dr. Robin Zasio

From the (Uncluttered) Desk of Dr. Robin Zasio